Located on Sir John Rogerson’s Quay on the southern quays of Dublin city centre. The building is nestled right on the waterfront beside the iconic Samuel Beckett Bridge.

81b Campshires was built in the 1880’s and used to store numerous goods and valuables which would then be loaded directly onto the fleets of ships in the River Liffey to be transported around the globe. It is one of the only surviving warehouses of it’s kind that can be found in Dublin along this quay today. Later in it’s life the building became used by various British regiments to camp before being shipped out to war. Soldiers also used it as a resting place upon returning from various battles, hence where the name Campshires derived from.

The building was restored to the highest possible standard which included a brief from Lawrence and Long Architect’s for the conservation of whatever materials and details where possible. This included keeping old rafters to the roof space which gives the building a unique look from the newly installed mezzanine floor area. Steel beams to the south gable wall were sandblasted and restored. Wheels on which the sliding doors to the north facade were also sandblasted and restored for reuse on the new European White Oak doors. These doors are now electronically operated for ease of access. Glass manufactured in Austria was installed throughout including a roof lantern to allow as much natural light as possible into the building. LED lights were installed around the glass lantern to light up at night time to give a distinctive feel. Great care and special attention was given to keeping the character of the building despite adding a whole array of new amenities. 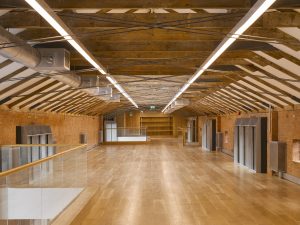 An external boardwalk was built right on the rivers edge with a future capacity to cantilever out over the River Liffey. The spectacular views down the river from the boardwalk are quite simply stunning. A highly engineered protective glass balustrade was put in place which can withstand the force of a hurricane. Granite paving runs down the boardwalk to give a sharp clean aesthetic look.